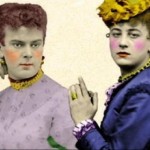 Edwin was sitting on the edge of Bronwyn’s desk, explaining bell bottoms.

‘You see Bronwyn, bell bottoms were a radical identity label. They were associated with ‘the workers’ or ‘the common man’. Only later did they present ‘radical chic’ or hip style worn by the trendy middle classes and even members of the elite. The flared thighs on bell-bottom trousers were initially used by US Navy, or sailors working on merchant ships in the seventeenth century. Trousers had to be quickly rolled-up for sloppy cleaning work on deck. Or, if your sailor fell overboard he would be readily identifiable from the floating fabric, and might be rescued, if time permitted, or he might float to safety when the life-saving fabric filled up with oxygen! Bell bottoms were practical for the man at sea and could be drawn over the sailor’s boots.Bronwyn looked blankly at Edwin.  Sue interjected with, ‘you mean people wore that same style back in the day?’

‘Of course. Flared pants, produced from denim, cotton, and silk and polyester, were the emblems of the elite fashion personality of the 1970s, and everyone expected that they would eventually disappear off the face of the earth. Not so – bell bottoms continued, and towards the 1990s were part of the fashion tendency toward loose clothing.’

Edwin was on a roll. ‘During this period of clothing extravaganza, bell bottoms were not seen as a practical fashion apparel.  Many people considered them to be the uniform of radicals and dropouts. These wide- leg boot-friendly trousers were often not available in a local store, and so surplus stores began selling patches of fabric in large quantities to accommodate the new clothing cult of stitching a triangle of material to broaden the leg and cut the exterior leg seam.  The 1970s had started to promote fashionable flares made from a broad number of fabrics and the trend began for skin-tight pants into the lower leg, then flared-out in a broad, gentle drape. Some trousers were so broad they were nicknamed “elephant flares.” Pat Boone – singer-songwriter – was notorious for wearing these.’

‘That’s amazing,’ cheeped Bronwyn. She gazed up at Edwin with adoring puppy-dog eyes.

‘Yes, isn’t it. Actually, Derek and the Dominos – you won’t know them – way to far back – they had a pop song called ‘Bell Bottom Blues’.

‘So wot was elephant flares then?’ Sue asked.

‘Elephant flares were much like loon pants but usually made from denim, wide below the knee because they went with platform boots or shoes.’

‘You could say that. Merchant seamen, drunken sailors and the likes,’ Edwin said, he was enjoying showing off his authority on the subject.

‘Of course not, you’re both way too young.  Well, in the 1970s, Sonny and Cher were a popular singing duo, they wore loon pants on stage. Nowadays of course, bell-bottoms are considered vintage clothing.’

Walter Flood – more from the village of Feckenham Swarberry

anyone can be president of the USA just apply